The 5 Different Types of Plumbing Pipes 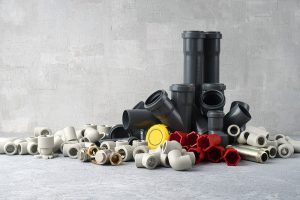 Copper is both one of the older types of plumbing pipe materials and a very popular option today – no other choice has stood the test of time quite so well. (For example, cast iron, an older pipe material, is no longer used in modern homes.) Copper pipes saw a widespread standard update in the 1960s that made it a common pick for American houses and has been doing well ever since.

Copper is both very durable and resistant to contamination; it doesn’t leach anything nasty into the water and doesn’t easily harbor bacteria. It also doesn’t crack or break easily when exposed to extreme temperatures. When the piping is discarded, it can be easily recycled, too!

On the other hand, copper isn’t always the right choice for plumbing. It tends to be expensive and has grown even more expensive in recent years, so owners must pay for its benefits. The process of mining and processing copper isn’t very environmentally friendly either. Some owners have sustainability as a priority for large installation projects.

PVC stands for Polyvinyl Chloride, one of the extremely popular types of water supply pipes for yardwork and DIY projects in addition to normal plumbing solutions. The combination of plastic and vinyl creates a rigid pipe that can be produced in nearly any shape and is extremely resistant to most environmental damage. It’s very light and easy to work with. It’s also good at handling high water pressure over extended periods of time without developing problems.

Note that not all PVC pipe is designed to transport potable water – the kind in your irrigation system may not be the same sort you want carrying your tap water. The NSF-PW and NSF-61 label are NSF International standards for piping that is suitable to carry drinking water and won’t leach any chemicals into that water as it is used.

Even with all its advantages, PVC isn’t suitable for every plumbing project. It can warp over time when exposed to very hot water, so it’s not often used for any water that needs to be heated. It may also be difficult to use in especially cramped areas.

The extra “C” in CPVC stands for Chlorinated. These Chlorinated PVC pipes are made with a different manufacturing process that makes them very resistant to water up to 200 degrees Fahrenheit, unlike traditional PVC. This makes the pipes a popular option in buildings where PVC is the best option while the pipes need to handle a hot water system. This is why these pipes are often sized like copper tubing – to help builders match piping when replacing older copper pipe systems.

The chlorinated piping production process does have its downsides. These types of pipes are significantly more expensive than normal PVC and significantly weaker to UV damage, so they shouldn’t be used outside or be exposed to sunlight.

PEX is an abbreviation used for Cross-Linked Polyethylene, a plastic material suitable for indoor plumbing. PEX was developed after the failure of polybutylene piping in the 1970s (which corroded when exposed to chlorine) to be more resistant to chlorine damage. PEX is similar to PVC, but much more resistant to extremely hot water – and flexible. That flexibility and the ease of working with plastic products make PEX particularly easy to install, repair and adjust when facing unexpected situations.

It’s no surprise that PEX has become one of the go-to types of plastic water pipe for indoor plumbing, Like CPVC, it cannot be used outdoors or in sunlight. Some are hesitant to use it because testing has shown trace particles can detach from the pipes and enter the water. However, PEX piping has been approved by environmental regulators and research has concluded it’s safe to use. Chlorine has still been shown to cause problems with PEX pipes over time, so it’s not used in systems with chlorine disinfection when possible.

When steel is galvanized, a coat of zinc is electrically bonded to its surface: This makes the steel highly resistant to rust and ready for decades of work. It’s the quintessential “threaded” plumbing pipe that’s screwed into other pipes to form a chain of pipe wherever it needs to go.

Galvanized steel pipes aren’t often used in plumbing these days, because they have several notable disadvantages that newer materials don’t have. They are very heavy, can develop clogs more easily than other pipes, and don’t last as long as copper or durable plastics. Even worse, if the zinc coating wears off, they start to rust and leak lead, as well as rusted iron, into the water supply.

If you aren’t sure which type of pipe to use in a plumbing project in Pittsburgh, just ask! The local experts at Stahl Plumbing will be happy to answer any questions you have.

What to Do About a Clogged Shower Drain