The Reasons Behind a Clogged Kitchen Sink 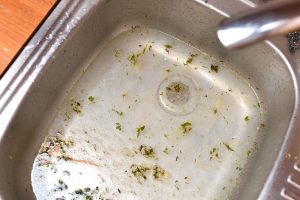 Even if you’re not a professional plumber, there’s nothing like a clogged kitchen sink to motivate you to find the tool to get that clog to move. Before you dump anything down the drain or poke around in it with a sharp object, you’ll want to first get to the bottom of the problem. Check out what the experts in kitchen plumbing repair in Pittsburgh, PA, say about the most common causes of kitchen sink clogs.

Every plumbing fixture in a house has a trap. Traps prevent sewer gas from getting inside your home. Traps pull double duty. They keep sewer gas out and let water flow from the sink to the main sewer line. Blocked traps are a primary cause of kitchen sink clogs. If you dump grease down the drain, and it combines with soap scum and other things like food particles, over time, a gunky clump builds up in the trap. The trap won’t open enough to let water through, and you end up with a clog.

Food in the Sink

You’d be surprised at the number of food items people try to wash down the drain. We’re not talking about what they put in the garbage disposal. We’ll get to that issue next! It’s the scraps we clean from plates after meals. It’s not meat and potatoes. Most of us know better than shoving big chunks of food down the drain. It’s the tiniest bits of food, but also eggshells, carrot peels, and even the stickers on produce that can cling to the pipes. Eventually, you’ll get enough foreign objects hanging on that they join forces and cause a clog.

About That Cooking Grease 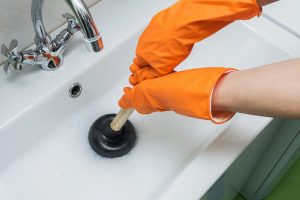 Let’s go back for a minute and talk about grease. If you dump cooking fat like grease from bacon or sausage, you’re asking for a clog. Plumbers call it FOG, short for fats, oils, and grease, and it’s a leading cause of clogs in kitchen sinks. FOG comes in many forms, including liquid oils, butter and margarine, and the solid grease you get after frying up meat. Many people think it’s okay to dump grease down the drain as long as they run hot water and detergent at the same time. Your plumber prefers you to place FOG in a disposable container and throw it in the garbage. It may mean they visit you less, but it will save the cost of emergency plumbing service.

Clogs in the disposal catch most people off guard. After all, most of us assume it’s like a mini-garbage dump designed to pulverize anything we put in it. That’s not true! Garbage disposals are yet another reason people need home plumbing repair in Pittsburgh, PA. Grease, eggshells, coffee grounds, banana peels, celery strings, and, yes, bones, all contribute to clog creation! If you make a mistake and drop something you shouldn’t in the disposal, don’t panic. Call Stahl Plumbing, Heating, and Air Conditioning at 412-273-1000. We’re on call 24/7 to help you deal with kitchen sink clogs.

Top Things to Look for When Hiring a Commercial Plumber

Factors That Can Affect the Cost of Bathroom Plumbing